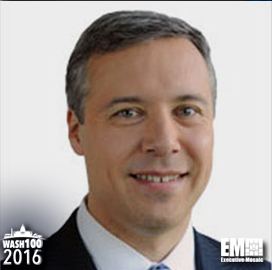 Executive Mosaic is glad to introduce Booz Allen Hamilton (NYSE: BAH) CEO Horacio Rozanski, for the second consecutive year, as an inductee into the 2016 edition of the Wash100 — Executive Mosaic’s annual selection of the most influential voices in the government contracting arena.

As of this article’s publication, the McLean, Virginia-based consulting firm was in the midst of the fourth quarter of its 2016 fiscal year and to date has recorded three consecutive quarters of earnings figures that exceeded Wall Street’s consensus outlooks.

Booz Allen, which runs its fiscal calendar on a April-March basis, also topped analyst expectations for revenue in two out of three quarters and expects to report full 2016 earnings of between $1.61 and $1.67 per share versus the prior year figure of $1.51 EPS.

The firm has accelerated investments in bid and proposal and hiring activities in order to achieve sales growth in the following fiscal year, Rozanski told investors in a January call to discuss Booz Allen’s third quarter results.

In that call, Rozanski described those investments as coming after a cycle where there “weren’t as many opportunities to go after” in a government services market that appears more stable.

“The market has solidified and is going to grow roughly $80 billion over the next two years without the (overseas war) budget increase, you’re looking at additional opportunities,” Rozanski said.

Booz Allen acquired the software development services business of SPARCin November 2015 for an undisclosed sum in a move Rozanski said aims to grow Booz Allen’s customer base and technical portfolio.

Also in 2015, Booz Allen transitioned off its exclusive prime position on the Survivability/Vulnerability Information Analysis Center contract during a second quarter that also saw a major boost to the firm’s sales pipeline through a potential $937 million contract award to support the U.S. military’s Global Threat Mitigation Program.

“The new contract leverages additional technical capabilities to cover a diversity of current and emerging global threats, both physical and cyber, for a broader range of clients in both the Army and the Joint Combatant Commands,” Rozanski told investors in October.

Executive Mosaic congratulates Horacio Rozanski and the Booz Allen Hamilton team for their selection to receive this award.