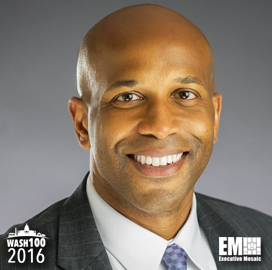 Executive Mosaic is honored to introduce Tony Frazier, senior vice president of DigitalGlobe‘s government solutions business, as an inductee into the 2016 edition of the Wash100 — Executive Mosaic’s annual selection of influential leaders in the government contracting arena. Frazier is a two time recipient of this award.

Frazier concluded his first full calendar year in the role for the Longmont, Colo.-based satellite imagery contractor and the company has recorded year-over-year U.S. government revenue increases in all three quarters for 2015 with fourth quarter numbers not stated as of this article’s publication.

First quarter sales jumped 17.6 percent from the same period in 2014, second quarter revenue was up 18.4 percent and the third quarter showed a 26.4-percent increase.

DigitalGlobe’s $338.9 million in U.S. government revenue through three quarters represents 65 percent of the company’s total sales over those nine months and is 20 percent higher than figures reported for the same January-September period in 2014.

He started as government lead in January 2015 and subsequently told ExecutiveBiz in an interview one month later that the government business focuses on work to help defense, intelligence and State Department customers use what he called the “full value” of their satellite imagery investments.

“We spend a lot of time engaging with different stakeholders in the military and intelligence community, primarily to understand potential new products that can be built to meet their full mission requirement,” he said then.

“We want to harness the power of automation and crowdsourcing to convert our raw imagery into actionable observations that help the U.S. government and its allies to protect our national security interests,” Frazier said of the initiative.

Executive Mosaic congratulates Tony Frazier and the DigitalGlobe team for their selection to receive this award.