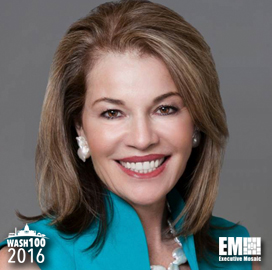 Executive Mosaic is pleased to introduce Teresa Carlson, vice president of the global public sector at Amazon Web Services, for the second consecutive year, as an inductee into the 2016 edition of the Wash100 — Executive Mosaic’s annual selection of influential leaders in the government contracting industry.

In a recent interview with Fedscoop, Carlson said she believes the Federal Risk and Authorization Management Program has helped facilitate the adoption of cloud platforms and implementation of enterprise cloud security standards.

“Enterprises want a model they can snap into, and I think FedRAMP is as good as model as any,” she said.

Carlson also observed that Silicon Valley-based technology firms have begun to recognize the opportunity to collaborate with federal agencies.

She told the Washington Business Journal in an interview that the U.S. government also has initiated efforts to recruit talent from Silicon Valley as well as bring tech companies to Washington.

In April 2015, AWS reported $1.57 billion in revenue for the first quarter of 2015 to represent an almost 50-percent increase from the prior year period.

Prior to Amazon, Carlson spent eight years at Microsoft, where she held leadership roles within the technology firm’s federal government business.

Carlson also served as a consultant, practitioner and business manager during her 15 years in the healthcare sector.

Executive Mosaic extends its congratulations to Teresa Carlson and the Amazon Web Services team for their selection to receive this award.