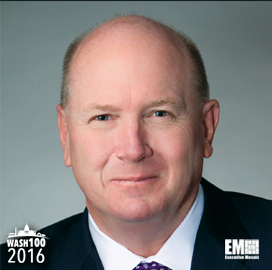 Executive Mosaic is honored to announce CACI International (NYSE: CACI) CEO Ken Asbury as an inductee into the 2016 edition of the Wash100 — Executive Mosaic’s annual selection of the most influential voices in the government contracting arena. Asbury has been selected three times to receive the annual Wash100 award.

Asbury joined the Arlington, Virginia-based government services contractor in February 2013 and the company has since made two significant acquisitions that now are part of the market’s ongoing trend of consolidation among its largest players.

The company signed an $820 million agreement to buy cybersecurity and intelligence services provider Six3 Systems eight months after his appointment and closed its $550 million purchase of the national security solutions business from former owners L-3 Communications (NYSE: LLL) in February of this year.

CACI first announced its deal with L-3 in December 2015 and said at the time it expected NSS to contribute $1 billion in new annual revenue and grow CACI’s footprint across intelligence community and enterprise information technology markets.

Asbury told investors in a subsequent call then that the purchase of NSS aims to align CACI’s offerings with an increase in funds toward new technology platforms and infrastructures for the security of information and speed of how it is exchanged across enterprises.

“One of the Director of National Intelligence’s principle aims is to put a single infrastructure in place to pass classified information among various agencies. NSS, without getting into a lot of detail, has some very key parts of that infrastructure already and the opportunity to do more,” he said then.

In its second quarter earnings statement, CACI adjusted guidance for fiscal year 2016 — which runs between July and June — to reflect projections for NSS’ contributions to financial results and lifted both forecasts for earnings and revenue.

CACI exceeded Wall Street analyst forecasts for earnings and revenue in both quarters-to-date for the fiscal year.

Executive Mosaic congratulates Ken Asbury and the CACI International team for their selection to receive this award.