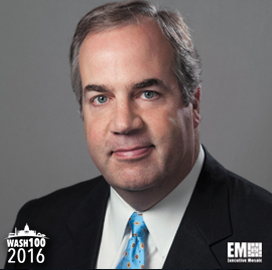 Executive Mosaic is glad to announce Iridium Communications CEO Matt Desch, for the second consecutive year, as an inductee into the 2016 Wash100 — Executive Mosaic’s annual selection of the most influential voices in the government contracting arena.

Desch has led the McLean, Va.-based satellite network and services provider since 2006 and stewarded the company through both its 2008 initial public offering on the NASDAQ stock market and 2009 merger with special purpose acquisition company GHL Acquisition Corp. to create the company now known as Iridium.

Iridium’s revenue has increased 18 percent in the five full years since the merger with profit up more than twofold in that timespan.

Another major storyline for Iridium in 2015 was its efforts toward the startup of the 66-satellite Iridium NEXT constellation, which has a scheduled launch date of July 2016 with 10 satellites initially and Iridium intends to have the network at full-operational status by the end of 2017.

The company has invested $3 billion into the “NEXT” constellation and Desch has told investors Iridium expects the effort to spur continued revenue growth from fiscal year 2017 onward.

SpaceX will carry NEXT’s first 10 satellites into space in July 2016 and a Dnepr rocket will subsequently launch two more after Kosmotras obtains approval for the launches, Desch said to investors Feb. 25.

Elon Musk’s SpaceX outfit originally was contracted to carry out its first and second launches four months apart but that timeline has been reduced to three, he told investors then.

“We’re lucky to have in SpaceX a launch provider flexible enough to move our launch up by a month with this little notice,” Desch said.

When complete, Iridium NEXT will offer mobile communications to customers across the globe with 100-percent coverage and also offer the opportunity for hosted payloads, a tool built to operate separate communications networks independently of the satellite bus.