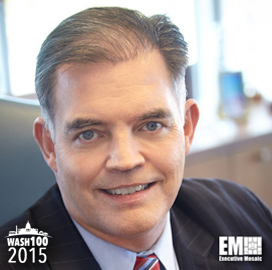 Executive Mosaic is glad to announce Chuck Prow, general manager of IBM‘s global government industry unit, as the newest inductee into the Wash100 — a group of influential leaders in the government contracting industry.

Prow manages the company’s market differentiation, business partnerships and acquisition strategy for all levels of government in both the U.S. and abroad as head of the global government business.

He told GovConWire in June 2014 that as GM, he would focus on making IBM’s technology and services available to governments in areas such as public safety, social services, security, protection of critical infrastructure and urban management.

“IBM has made a significant investment over the recent years in the areas of big data, cloud, mobile and social. These areas will continue to represent significant growth opportunities in the coming years,” he said.

He was included in FCW’s Fed 100 list for 2008 and Executive Mosaic’s Wash100 list for 2013 and is a board member with the Wolf Trap Foundation for the Performing Arts.

Executive Mosaic offers its congratulations to Chuck Prow and the IBM team for their receipt of this award.