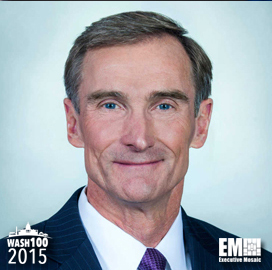 Executive Mosaic is glad to announce Roger Krone, CEO of Leidos, as the newest inductee into the Wash100 — a group of influential leaders in the government contracting industry.

Krone joined Leidos in July 2014 as CEO and a member of the board of directors following 17 years at Boeing, where he served as president of the network and space systems business for six years until his appointment to lead Leidos.

Executive Mosaic selected his move to Leidos as one of the top executive moves in the government contracting industry during 2014.

On the heels of his selection to 2013’s Wash100 list, he described to Executive Mosaic his move to the Washington area from Boeing’s Chicago hub as one that required him to “take what I learned about management and leadership and apply it to a new kind of business.”

“That required being more versatile, more agile and learning a new customer set,” he said.

A consortium of Leidos, Accenture and Cerner is one of four groups of contractors in the running for a multibillion dollar contract to modernize the Defense Department‘s electronic health records system, an award that could come down during summer 2015.

His 40-year career includes engineering, operations and finance roles at aerospace companies such as Boeing, General Dynamics and McDonnell Douglas.

Executive Mosaic extends its congratulations to Roger Krone and the Leidos team for their receipt of this award.