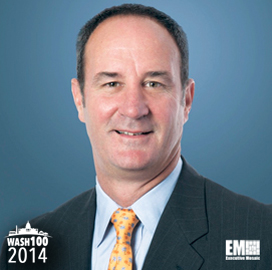 Executive Mosaic is honored to announce , chief executive at the VT Group as the newest inductee into the Wash 100, the premier group of leaders who create value for the American public and execute strategic vision at the intersection of the public and private sectors.

Ryan kicked off his 2013 by announcing his move to VT Group from the COO position within ManTech International’s emerging markets group near the end of the January.

A former 10-year U.S. Marines Corp infantry commander and intelligence officer, Ryan later oversaw updates to airborne space surveillance and reconnaissance systems as a senior executive in the Office of the Secretary of Defense.

While he was with ManTech, the company won several awards deepening its work with the Combating Terrorism Technical Support Office through international support for the office’s “unique operational and technical demands to quickly deploy advanced solutions in the global war on terror,” Ryan said. Ryan has brought that international perspective and foresight to VT Group, announcing this year that it is leveraging its aviation systems in collaboration with Granite State Manufacturing to provide commercial, civil and government customers around the world with a new unmanned systems solutions.

In the private sector, Ryan had also held the chief executive role at Androit Systems Inc., served as president and chairman of Mercury Federal Systems, and held executive positions at SAIC and SRA International.

Executive Mosaic extends its congratulations to Terry and the rest of the VT Group organization.