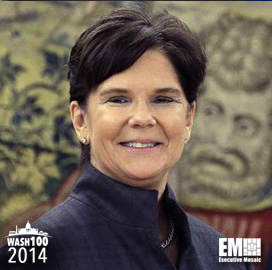 Executive Mosaic is honored to announce Phebe Novakovic, chairman and CEO of General Dynamics for one year, as the latest induction into the Wash100, the premier group of leaders who drive innovation and growth at the intersection of the public and private sectors.

She succeeded Jay Johnson as head of the Falls Church, Va.-based company at the start of last year and became one of three women at the time to hold the top executive post at a major U.S. defense contractor, including Marillyn Hewson of Lockheed Martin and Linda Hudson of BAE Systems Inc.

General Dynamics’ board of directors elected Novakovic to the helm three months after promoting her to the roles of president and chief operating officer from her position as executive vice president of the marine systems group, which encompasses the company’s shipbuilding and submarine construction businesses.

In 2005, she became senior VP of planning and development before moving to lead the marine systems group five years later.

She joined General Dynamics after serving four years as a special assistant to both the defense secretary and deputy defense secretary, with her government service career also including five years at the Office of Management and Budget as deputy associate director for the national security division.

Executive Mosaic extends its congratulations to Phebe Novakovic and the rest of the General Dynamics organization.