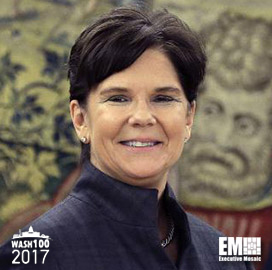 Executive Mosaic is glad to announce General Dynamics Chairman and CEO Phebe Novakovic as an inductee into the 2017 Wash100 — Executive Mosaic’s annual selection of the most influential voices in the government contracting arena.

The three-time Wash100 inductee started year five of her leadership over General Dynamics in January and the Falls Church, Va.-based defense contractor has recorded year-over-year increases in earnings per share for all four years of her tenure as its chief executive.

Investors have rewarded General Dynamics for its continued strong bottom-line performance as its stock jumped 93.27 percent between 2012 and 2015 in a period that included several new 52-week and all-time highs along the way.

General Dynamics reported 2016 revenue of $31.3 billion — flat from 2015 figures — and expects to see a 5.6-percent compound annual growth rate on the top line through 2020 on contributions from all four business segments: aerospace, combat systems, marine systems, and information systems and technology.

Forbes magazine listed Novakovic 54th in the publication’s 2016 list of “The 100 Most Powerful Women in the World” to lift her four spots from the prior year’s ranking.