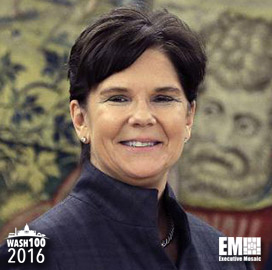 Executive Mosaic is honored to unveil General Dynamics (NYSE: GD) CEO Phebe Novakovic as an inductee into the 2016 edition of the Wash100 — Executive Mosaic’s annual selection of the most influential leaders in the government contracting industry.

Novakovic succeeded Jay Johnson as the Falls Church, Va.-based defense contractor’s CEO at the start of 2013 after seven months as president and chief operating officer that were preceded by three years as executive vice president of the marine systems group and five years as senior VP for planning and development.

Since her appointment, Novakovic has helped steer the company’s turnaround from its $332 million net loss for 2012, or 94 cents per share, to consecutive increases in earnings and profit for all three years since.

General Dynamics also recorded a $2 billion writedown in its 2012 results on costs of acquisitions in the information systems and technology group and Novakovic explained to investors in a January 2013 call that the charge was one facet of the company’s larger strategy to “reset” the IS&T segment’s business plan to account for some of those purchases.

“(Our) prime directive is drive cost out of our business, generate earnings and cash, expand our margins and reassure our shareholders that we’re wise stewards of their capital,” she said then.

Earnings per share have climbed 29 percent from 2013 to 2015, profit has risen 25 percent and sales have increased 2 percent over that period.

Novakovic told investors in a January call to discuss General Dynamics’ 2015 financial results — which topped the consensus analyst forecasts — that the company will allocate its entire $1.93 billion free cash flow toward dividends and share repurchases throughout 2016.

“We will use balance sheet cash to some degree to supplement our free cash flow for share repurchase activity,” she said in that call.

The company posted a 22-percent increase in earnings and profit from 2014.

Fortune Magazine profiled the 15-year General Dynamics veteran in a September 2015 article that charted her journey from a career in the intelligence community to the helm of the world’s fifth-largest defense contractor, according to Defense News’ 2015 ranking of the globe’s top 100 weapons makers.

According to Fortune, her career in between the IC and General Dynamics includes leadership roles at the Office of Management and Budget and the Defense Department.

Forbes magazine ranked Novakovic 56th in the publication’s 2015 list of “The 100 Most Powerful Women in the World,” which also includes another 2016 Wash100 selection in Lockheed Martin (NYSE: LMT) CEO Marillyn Hewson.

Executive Mosaic congratulates Phebe Novakovic and the General Dynamics team for their selection to receive the award.