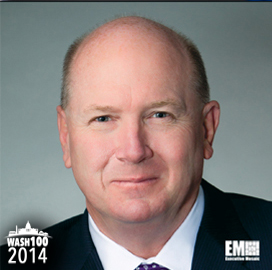 Executive Mosaic is honored to announce Ken Asbury, president and CEO of CACI International, as the newest inductee into the Wash 100, the premier group of leaders who create value for the American public and execute strategic vision at the intersection of the public and private sectors.

As chief executive at CACI, Asbury said he is pursuing a three-part growth strategy: “Win new business, drive operational excellence, and continue our successful mergers and acquisitions program as the first priority for the deployment of our capital.”

That strategy led in part to CACI closing its largest-ever acquisition this year, an $820 million pick up of McLean, Va.-based Six3 Systems, a provider of cyber and signals intelligence; ISR; and intelligence operations to the national security community.

“By securing and protecting information, systems and networks, agencies improve their defense posture while gaining new intelligence about existing threats,” Asbury told ExecutiveBiz before the deal was announced.

Asbury has also placed an emphasis on not only winning more work – but more lucrative work, honing the firm’s sights on contracts worth $1 billion and more. “We’ve always been good at winning,” Asbury told the Washington Post. “Now, we’re winning larger deals.”

“We want to go after larger jobs,” he added.

The business development and industry veteran spent close-to-30-years with Lockheed Martin prior to helping grow ASRC Federal’s program win rate nearly 100 percent year-over-year after he joined as that company’s president and CEO in 2011.

At Lockheed, Asbury helped grow the civilian business to $3.7 billion in 2009 sales and reel in more than $6 billion in new contract wins as the business president. Those results were due in part to his focus on emerging government priorities in healthcare, energy, homeland security, financial regulatory reform and immigration reform through strategic growth campaigns.

At CACI, Asbury has retained his focus on the future, including an “ongoing strategy to focus on the high-growth healthcare market” and capturing “additional growth opportunities presented by the ongoing transformation currently happening in the (geospatial) market.”

Executive Mosaic extends its congratulations to Ken and the rest of the CACI organization.