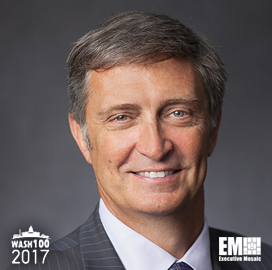 Executive Mosaic is pleased to announce Mark Gray, president and CEO of ASRC Federal, for the 3rd consecutive year, as an inductee into the 2017 edition of the Wash100 — Executive Mosaic’s annual selection of influential leaders in the government contracting arena.

Gray has been at the helm of the Beltsville, Maryland-based government services contractor since June 2014 after he previously served in various leadership roles at the former URS, Indus and Anteon.

“This acquisition expands our customer footprint in the intelligence community, and in key, select civilian and [Defense Department] markets, while strengthening discriminating capabilities in the areas of advanced analytics, signal intelligence, cybersecurity and large-scale data processing,” Gray said at the time.

The U.S. Air Force chose ASRC Federal in June for a potential $190 million contract to support operation and maintenance of the Vance Air Force Base in Enid, Oklahoma.

Additionally, the company secured a $35 million contract in November for systems engineering work at the National Oceanic and Atmospheric Administration‘s satellite command and data acquisition station in Fairbanks, Alaska.

The Professional Services Council appointed Gray to serve on PSC’s board of directors for a three-year term that began Jan. 1.

Executive Mosaic congratulates Mark Gray and the ASRC Federal team for their selection to receive this award.