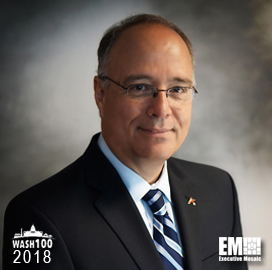 Executive Mosaic is pleased to announce that Peter Smith, President and Chief Executive Officer of American Systems, has been added to the 2018 edition of the Wash100 — Executive Mosaic’s annual selection of the most influential voices in the government contracting arena — for demonstrating excellence in negotiating contracts with the military, shedding light on network operations and devising infrastructure products for immediate deployment.

Serving in his current role of CEO for almost four years, Smith joined American Systems in 1980 as a Systems Engineer and Program Manager and went on to hold key leadership roles such as Chief Operating Officer, Vice President and Executive Director.

He has played an important role in the company’s ongoing development, evidenced by American Systems’ recent win of a potential five-year, $68.6 million task order to help the U.S. Air Force develop and implement an emergency mass notification system for the service’s branch personnel in the event of a “critical situation.” The cloud-based enterprise EMNS infrastructure, the company said in a statement, will employ Blackberry‘s AtHoc Crisis Communications Software Suite designed to run on Amazon Web Services‘ cloud platform.

“We know how important it is to our nation’s airmen and their families that they have a secure, real-time emergency notification system no matter where they are serving — we know what’s at stake,” Smith said.

Any award, he says, is part of “an ongoing effort” to extend American Systems’ profile as a tried-and-true provider of test-and-evaluation technologies and related services. Smith is the current vice chairman of American Systems’ board of directors and occupies a seat on the board of the Professional Services Council.

Executive Mosaic congratulates Peter Smith and the team at American Systems for receiving this award.