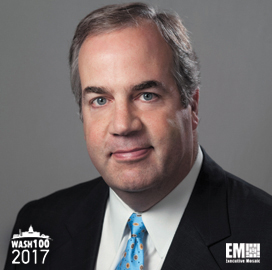 Executive Mosaic is honored to announce Matt Desch, CEO of Iridium Communications, as an inductee into the 2017 edition of the Wash100 — Executive Mosaic’s annual selection of the most influential voices in the government contracting arena.

Desch led the McLean, Va.-based company through the development of the $3 billion Iridium NEXT constellation and that proceeded to the launch of an initial batch of 10 satellites on Jan. 14 aboard a SpaceX Falcon 9 rocket.

The successful launch came after delays arising from separate software issues and the explosion of a Falcon 9 rocket in September 2016, which pushed back the schedule for Iridium NEXT.

Iridium plans six other launches through early 2018 for the future 81-unit constellation that will eventually replace the current aging constellation in orbit.

“It’s a very technically complex process and highly choreographed to replace the existing satellites now and validate everything… but 15 months from now, we’ll have a brand new network up for the next 15-20 years,” Desch told ExecutiveBiz shortly before the launch.

Iridium NEXT will work to provide communications, tracking, internet and mobile phone services to both commercial and government customers, as well as potentially provide an alternative navigation system amid security concerns regarding GPS.

Desch has more than 30 years of telecommunications management experience from his previous work at Bell Laboratories, Nortel Networks and Telcordia Technologies.

He is a former board member at Science Applications International Corp. and chairman of Airspan Networks, while he currently serves on the National Security Telecommunications Advisory Committee.

Desch joined Iridium as CEO in 2006 and has since worked to drive the satellite communications company’s innovation and growth efforts that included a February 2008 initial public offering.