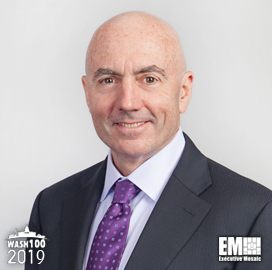 CEO and Member of the Board of Directors

Executive Mosaic is pleased to announce that Mark Testoni, president and chief executive of SAP National Security Services, has been selected for induction into the 2019 edition of the Wash100 “” Executive Mosaic's annual selection of the most influential voices in the government contracting arena “” for his role in forming a partnership with Amazon Web Services and his continued efforts to revolutionize the cloud and data industries.

SAP NS2 formed a partnership with Amazon Web Services to deliver services and tools to customers for migrating data workloads to the cloud in June 2018. The collaboration helps clients comply with regulatory requirements like the Federal Risk and Authorization Management Program and others. Testoni said the partnership will help customers improve security and reduce costs in moving to the cloud.

“We continue to see our public sector customers move more critical workloads and applications to the cloud,“ said Dave Levy, vice president of the U.S. government at AWS and a two-time 2019 Wash100 winner. “This collaboration is one way in which we can further support them, delivering on the tools and services they've requested.“

Testoni made the argument that app developers and companies should give their customers more information about data collection by mobile applications and could have labels describing privacy policies in a way that is similar to how food products carry nutrition and ingredient information. His remarks were made following reports about security vulnerability that exposed the locations of classified military bases through a fitness tracking app that U.S. soldiers used during training.

Testoni emphasized the importance of training programs as a part of cyber defense strategies in October 2018. A recent study from the Federal Information Systems Security Educators Association showed that 34 percent of cyber breaches are caused by negligence, and Testoni believes a specific approach to cyber training stresses the responsibility employees have to be more knowledgeable.

Before being appointed president and chief executive of SAP NS2 in 2011, Testoni joined SAP Public Services in 2009 as the president. Previously, he served 20 years in the U.S. Air Force and specialized in financial management, IT and logistics and held the role of deputy director.

Testoni possesses 30 years of experience in the public sector and 14 years in the IT industry. He is a member of the American Institute of Certified Public Accountants, an editorial advisor to ExecSense and a member of the board of directors of Integra Realty Resources.