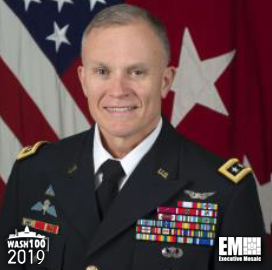 Executive Mosaic is pleased to introduce Army Lt. Gen. Robert Ashley, director of the Defense Intelligence Agency, as an inductee into the 2019 Wash100 “” Executive Mosaic's annual selection of the most influential voices in the government contracting arena “” for leading the agency’s modernization efforts with emerging technology.

During a June 2018 summit, He emphasized the agency would expand its data collection efforts to deal with the space domain and seek intelligence and information on sophisticated air, ground and sea technology platforms.

He cited emerging threats from Russia and China given their rapid development of new military technologies.

“We watch the AI side of the house, the hypersonics, counter-space, [and] what they’re doing with regard to subs, if you’re following the maritime piece of that as well,“ Ashley told a Center for Strategic and International Studies event in September.

Eight companies and one nonprofit were selected for a potential 10-year, $500 million contract to support the DIA science and technology directorate in September 2018. Contractors will work on research, development, engineering and technical tasks at various government and contractor facilities within the Washington, D.C. area through 2028.

Prior to his current role, Ashley held various leadership roles with the U.S. Army including deputy chief of staff, G-2 and director of intelligence at the Army Joint Special Operations Command and the U.S. Central Command.

Executive Mosaic congratulates Robert Ashley and the DIA for their selection to receive the award.

Visit the Wash100 site to learn about the other 99 winners of the 2019 Wash100 Award. On the site, you can  submit your 10 votes for the GovCon executives of consequence that you believe will have the most significant impact in 2019.