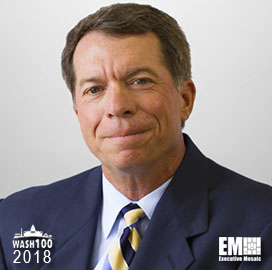 Executive Mosaic is pleased to announce that George Wilson, President and CEO of ECS Federal , has been inducted into the 2018 edition of the Wash100 — Executive Mosaic’s annual selection of the most influential voices in the government contracting arena — for spearheading strong growth and leadership during a pivotal merger and acquisition.

IT provider and professional services company On Assignment, Inc.recently signed a definitive agreement to acquire ECS for $755 million, the company said in a release. The transaction, subject to regulatory approval and customary closing conditions, is expected to close in April. The terms stipulate that ECS will become a division of On Assignment, but continue to operate under its name. Wilson and his leadership team will continue to oversee daily operations, working alongside On Assignment CEO Peter Dameris, who aims to re-position his company’s place in the market.

“ECS’ government services solutions will complement and elevate our offerings and strengthen our position as a premium IT and professional services provider,” said Dameris. “Our addressable end market is now $279 billion by virtue of our entering the $129 billion government services space. ECS’ long-term contracts, which average five years in length, and a robust backlog of $1.6 billion, provide strong revenue visibility and mitigate volatility from permanent revenue and a more challenging economic environment.”

ECS has many long-term customers, having built a reputation for delivering agile software and big data analytics, cloud-based data, worldwide computer networks and mission-critical network defense solutions. “This acquisition immediately introduces a company with the scale, contracts, capabilities, personnel, past performance and ability to compete for the largest opportunities in the federal market. The entire team is energized about the possibilities,” said Wilson in the release.

This isn’t Wilson’s only experience being part of a large M&A. While executive vice president at Stanley Associates, he led the company from $2 million in annual revenue to $900 million, prior to Stanley being acquired by CGI for $1 billion in 2010.

Wilson joined ECS Federal in 2011 as chief strategy officer and was promoted to his current role in February 2014. Of working there, he said in 2016, “Our people are engaged and doing what it takes to provide exceptional service, solve programs of national importance and provide opportunities for our employees. I enjoyed my time in the Navy, but the privilege to lead and work with such a great team at ECS is the most rewarding.”

Executive Mosaic is proud to present George Wilson and the ECS Federal team with this award.