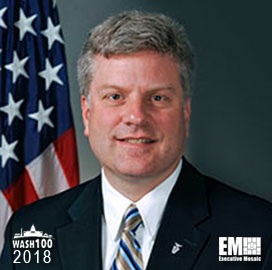 Executive Mosaic is honored to introduce Steven Walker, director of the Defense Advanced Research Projects Agency, as an inductee into the 2018 edition of the Wash100 — Executive Mosaic’s annual selection of influential leaders in the government contracting arena–for effective program management in the public sector.

Walker was assigned DARPA director in November 2017 after holding the position on an interim basis beginning January 2017.

In 2015, Walker said that DARPA seeks to cut the price of weapons and other military equipment by rethinking “complex military systems.”

These military systems can be broken down into smaller platforms that can use technologies such as artificial intelligence to adapt to unforeseen threats, Walker stated during a roundtable session in 2016.

DARPA also develops technologies to boost space situational awareness, including the Space Surveillance Telescope that the agency transitioned to the U.S. Air Force.

Walker noted that the transfer of SST is part of DARPA’s commitment to “make those early pivotal investments in breakthrough technologies for national security.”

The DARPA director said during a forum at Harvard University in March 2017 that DARPA works to attract talents through its mission even if the industry can offer higher paying jobs.

“They’re willing to take less money to work at a place that is that dedicated to getting job done,” Walker noted.

He also added that people who come to work for DARPA want to contribute ideas that they cannot develop elsewhere.

Executive Mosaic congratulates Steven Walker and the DARPA team for their selection to receive this award.