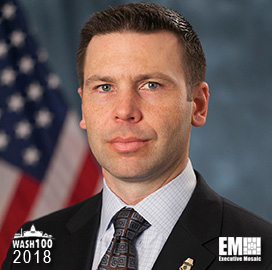 Executive Mosaic is pleased to announce Kevin A. McAleenan, Acting Commissioner of U.S. Customs and Border Protection, as an inductee into the 2018 edition of the Wash100—Executive Mosaic’s annual selection of influential leaders in the government contracting arena—for his integral work in the development and implementation of counter-terrorism strategy along our nation’s borders.

McAleenan, the chief operating official of the agency responsible for handling customs, immigration and border security at points of international entry (land, air and sea), certainly deals with his fair share of hard-pressed matters of national security, ranging from human trafficking and narcotics distribution to terrorism prevention and recruitment of law enforcement personnel.

In a past interview with Washington Post, McAleenan said that he does not see a more challenging mission in law enforcement, as the CBP is recognized as the epicenter of counter-terrorism, border security and immigration, and expediting trade and travel.

“[CBP] priorities are focused on earning and maintaining the public trust through the transparency of our policies, our responses to incidents, and our approach to ensuring the integrity in the workforce,” he said. “If you’re unable to achieve that, you won’t have the support of the American people or Congress.”

McAleenan was nominated to lead the DHS component of CBP in the spring of last year for his past work in implementing innovations that facilitated the U.S. international arrival and departure process. His involvement with the private sector has saved the government and the travel industry from wasting valuable time, limited resources and expendable energy.

As the agency’s chief executive, McAleenan oversees more than 60,000 employees while managing a $13 billion budget, working to ensure operational effectiveness in protecting national security. Under President Donald J. Trump’s administration, his workload has stretched as far as identifying locations and designs for the southern border wall, to researching and providing insights on the future of border security through the application of cutting-edge technologies such as biometrics and facial recognition hardware.

McAleenan constantly works to improve CBP’s capabilities, pushing to keep the strategic priorities of the agency in line with pursuing innovation in security strategies. His ethic is based in fact, field work and humility, serving previous roles like that of directing border security operations at Los Angeles International Airport and 17 other airport facilities from 2006 to 2008.

For his efforts in counter-terrorism, McAleenan was honored with a 2015 Presidential Rank Award, the highest civil service award in the nation. He also received the Service to America Medal, Call to Service Award in 2005 for his leadership and advocacy as Director of the Office of Anti-Terrorism in the post-9/11 border security context.

Executive Mosaic congratulates Kevin McAleenan and his team at the U.S. Customs and Border Protection agency for his selection to receive this award.