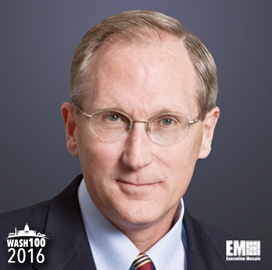 Executive Mosaic is honored to introduce Larry Prior, CEO of federal technology services contractor CSRA, a two time selection and the newest inductee into the 2016 edition of the Wash100 — Executive Mosaic’s annual selection of influential leaders in the government contracting arena.

CSC and SRA announced the transaction and Prior’s appointment as CEO of the combined company in September.

CSRA detailed its business strategy to investors in early November and said the company estimates nearly $5 billion in annual revenue across 2,000 contracts and task orders, as well as a potential $23 billion pipeline.

Prior formerly led the U.S. government business at CSC as executive vice president and general manager for close to two years and first joined the company in May 2013 to head its defense and intelligence business.

He will also serve as a member of the board of directors at CSRA, which upon the start of its regular-way trading replaced CSC in both Executive Mosaic’s GovCon Index and the S&P 500 composite index.