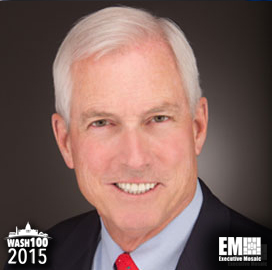 Executive Mosaic is glad to unveil Tom Frana, president and CEO of ViON, as the newest inductee into the Wash100 — a group of influential leaders in the government contracting industry.

He first joined the company in 1992 and is a 40-year veteran of systems engineering, sales and marketing, management and customer service roles at vendor and information technology companies around the world.

Last year, the company launched its on-demand cloud service for both the government and commercial markets and a cybersecurity predictive analytics tool that works to counter insider threats.

In October 2014, ViON said it won a potential $139 million contract to operate and modernize the U.S. Patent and Trademark Office‘s private cloud storage.

“At ViON, we have a culture that is focused on providing tailored solutions for our customers to ensure the success of their missions,” Frana told Executive Mosaic.

Frana is a former member of the U.S. Marine Corps and a current member of the Armed Forces Communications and Electronics Association executive committee and USO Dallas-Fort Worth advisory council.

Executive Mosaic offers its congratulations to Tom Frana and the ViON team for their selection to receive this award.