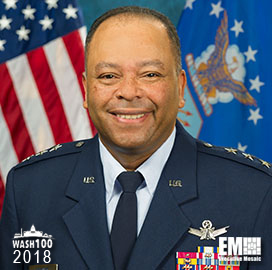 Executive Mosaic is honored to introduce U.S. Air Force Lt. Gen. Samuel Greaves, director of the Missile Defense Agency, as the newest inductee into the 2018 edition of the Wash100 — Executive Mosaic’s annual selection of influential leaders in the government contracting arena — for his strategic initiatives, rational planning and resourcefulness in working with agencies and Capitol Hill on reducing threats and focusing on matters of national security.

Greaves assumed his current post at MDA in 2017, months after his nomination for the role.

“In addition to successfully intercepting the target, the data collected will allow MDA to enhance the THAAD weapon system, our modeling and simulation capabilities, and our ability to stay ahead of the evolving threat,” Greaves said.

In August 2017, he spoke before the attendees of the Space & Missile Defense Symposium held in Huntsville, Alabama, and expressed his confidence in the country’s ballistic missile defense system that was demonstrated through capability testing.

“I believe deep down in my heart the nation should be very confident that we have demonstrated the ability to defend against the range of threats that we are seeing today,” Greaves said.

He noted that MDA has been working with the administration and Congress to secure the resources needed to field systems to defend the country and stay ahead of potential threats.

He previously served as deputy chief of MDA and commander of the Air Force’s space and missile systems center at Los Angeles Air Force Base in California.

He is the former director of strategic plans, programs and analyses within the Headquarters Air Force Space Command at Peterson AFB in Colorado.

Executive Mosaic congratulates Lt. Gen. Samuel Greaves and the MDA team for their selection to receive this award.