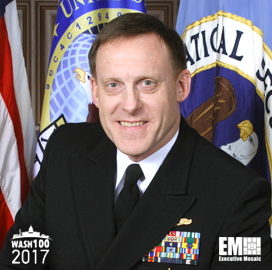 Executive Mosaic is pleased to recognize U.S. NavyAdm. Michael Rogers, head of the Cyber Command and National Security Agency, as an inductee into the 2017 edition of the Wash100 — Executive Mosaic’s annual selection of influential leaders in the government contracting arena.

Rogers oversaw the formation of Joint Task Force Ares in 2016 to produce digital weapons that will aid military efforts to disrupt the Islamic State militant organization’s communication networks and systems.

In a September panel discussion, he said NSA moved to draw creative insights from industry professionals and create opportunities for government and military personnel to have a similar initiative.

“We have got to create a construct where people can work with us for a while, go to the private sector and come back but also bring people from private sector whose insights might have value — that’s fundamental to the future for us,” said Rogers, a three-time Wash100 inductee.

The admiral told a Center for Strategic and International Studies-hosted forum held in September last year the U.S. government implemented initiatives that brought together the intelligence community, military and law enforcement as a result of the 9/11 terrorist attacks.

Rogers told the CyberMaryland Conference in October that both Cybercom and NSA launched internship programs to address each organization’s cybersecurity workforce needs and cited training and motivation as two key elements for the Defense Department‘s cyber defense initiatives.

At a November Wall Street Journal-hosted forum, the 36-year Navy veteran called for public-private collaboration to develop an integrated approach to avoid damaging attacks on the country’s critical systems such as election-related infrastructure.

“The ultimate solution in my mind is how do you bring this public-private partnership?” the 36-year Navy veteran told WSJ Deputy Editor-in-Chief Rebecca Blumenstein in an interview.

“The agreement I always reach with whoever we’re working with is: I will not use the data we gain for anything other than the exact purpose I communicate to you.”

Executive Mosaic congratulates Michael Rogers and the NSA and Cybercom teams for their selection to receive this award.