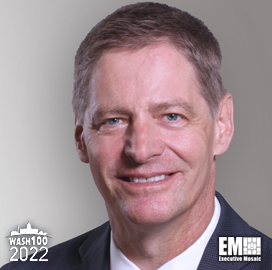 Lou Von Thaer, president and CEO of Battelle, has been selected to receive a 2022 Wash100 Award for stewarding the nonprofit organization to position itself for annual revenue growth and its management role at eight of the 17 Department of Energy national laboratories.

This marks Von Thaer’s fourth consecutive induction and seventh Wash100 win overall in the nine-year history of the award. Visit Wash100.com to cast a vote for him as your favorite GovCon figure.

In February 2021, the Battelle Savannah River Alliance received the green light to take over the responsibility for the management and operations of the Department of Energy’s Savannah River National Laboratory under a 10-year, $3.8 billion contract.

“We have the lab management experience to make a difference and we’re committed to ensuring the success of this important national resource,” Von Thaer said when the Battelle-led consortium won the contract in December 2020.

In May 2021, The Columbus Business First reported that Battelle was on track to reach an annual revenue of nearly $10 billion to double the figures recorded before Von Thaer took leadership of the Columbus, Ohio-based research and development contractor as president and chief executive on Oct. 1, 2017.

“We’re starting to see the payoff,” he said of the organization with a range of research programs, an intellectual property portfolio and a pipeline of technologies for its development partnerships.

His remarks came after the nonprofit and several venture capital firms invested $200 million to establish a gene therapy R&D company named AmplifyBio, with the nonprofit’s life sciences research unit serving as the starting point for the startup.

“This is why Battelle exists—to happen to the world,” Von Thaer said in May. “We see a need, we see opportunities, we search for partnerships, and we keep Battelle at the leading edge of discovery for the benefit of humanity. I’m excited to see where the team takes AmplifyBio and proud to support its growth through our continued involvement.”

Battelle has public health-related projects with some government agencies such as the TechAware Search Continuous Automated Scanning for Technology Transformation system, a predictive tool developed for the Intelligence Advanced Research Projects Activity to help analysts identify epidemic security threats. The nonprofit organization also is among the three industry partners that secured Department of Defense contracts worth $650 million for COVID-19 test administration and logistics support to the Department of Health and Human Services’ Midwest Expanded Testing Coordination Hub.

In a March 2021 opinion piece for The Columbia Dispatch, Von Thaer viewed biotechnology, neurotechnology and ecotechnology as the science-based fields that drive innovations to protect Earth and the people living on the planet.

“Humanity needs innovative solutions more than ever. As we forge ahead, I believe science is our best path forward,” said the seven-time Wash100 winner.

Executive Mosaic congratulates Lou Von Thaer and the Battelle organization for their selection into the 2022 edition of the Wash100. Cast a vote for him on Wash100.com by April 30.