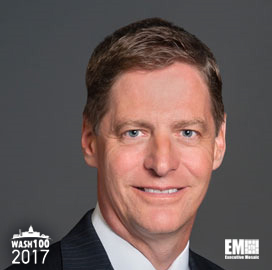 Executive Mosaic is glad to unveil DynCorp International CEO Lou Von Thaer as the latest inductee into the 2017 Wash100 — Executive Mosaic’s annual selection of the most influential voices in the government contracting arena.

The three-decade GovCon veteran became chief executive of the McLean, Va.-based global aviation logistics and government services contractor in June 2015 after nearly two years at Leidos as national security sector president and the prior eight at General Dynamics, where he served as president of the former advanced information systems business unit.

For calendar year 2016, Von Thaer’s main priority for DynCorp International was to shore up the company’s balance sheet and in particular hundreds of millions of dollars in debt that were due July 1 and the company successfully secured new terms in June to avoid default.

Von Thaer spoke to the Washington Business Journal for an interview published July 8 to discuss the company’s long-term strategy focused on expansion of information technology logistics work for U.S. customers and growth in training services across international markets.

Both areas and the long-term international strategy in particular offer the company an “opportunity to level out and have a base of business that the contingency business can ride up and down on instead of so much of the core business being contingency-based,” he told the publication.

Upon his appointment, Von Thaer took the helm of a company that has seen its revenue decline in half to $1.9 billion between 2012 and 2015.

The company received a pair of key bookings in 2016 to help rebuild its revenue base through a potential five-year, $320.5 million contract for engineering and logistics support to the U.S. Army’s Intelligence and Security Command along with a $106.2 million award to help maintain aircraft for Naval Test Wing Atlantic.