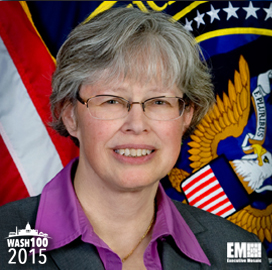 Executive Mosaic is honored to unveil Stephanie O’Sullivan, principal deputy director of national intelligence at the Office of the Director of National Intelligence, as the newest inductee into the Wash100 — a group of influential leaders in the government contracting arena.

The country’s number two intelligence official is in charge of coordination and information-sharing between intelligence agencies as well as the intelligence integration initiatives of DNI James Clapper, another inductee into Executive Mosaic’s Wash100 list for 2015.

Before moving to ODNI in February 2011, she worked at the CIA for 16 years.

She served as associate deputy director of the agency and head of the CIA’s directorate of science and technology, where she held leadership positions in research and development and systems acquisition.

O’Sullivan has also worked at the Office of Naval Intelligence and TRW.

Executive Mosaic congratulates Stephanie O’Sullivan and the ODNI team for their selection to receive this award.