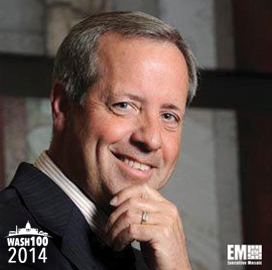 Executive Mosaic is honored to introduce Brad Antle, Salient Federal Solutions president and CEO, as the newest inductee into the Washington 100, the premier group of leaders who drive innovation and growth at the intersection of the public and private sectors.

A three-decade veteran of developing and delivering IT solutions, Antle formed Salient Federal Solutions in 2009 with the goal of forming a federal IT and engineering solutions business that “isn’t just a ‘me-too’ services company,’ but differentiates itself from the many GovCon service providers by fulfilling critical demands through a collaborative approach with its government clients.

Antle says his entrepreneurial spirit thrives on building companies and communities that are relevant not for just today, but to the needs of the future, and his career speaks to his reputation as a forward thinker.

The retired U.S. Navy Surface Warfare Officer told GovCon Exec that he places some of his highest personal and professional stock in the company’s work in Agile development, IPv6 protection and detection, and secure mobility.

Salient works to leverage its Agile framework and its CMMI L3 certified Agile software development “to introduce just the right amount of Agile to meet our customers’ expectations,” such as quickly adjusting to budget pressures, new policies and implement mandates.

Antle said the Fairfax, Va.-based contractor’s ‘Voyager Mobility’ product is currently used by 1,000s of government customers and works to simplify the development of applications that transfer secure government data.

He added that Salient will continue to invest in Agile development, cybersecurity, mobility and other technologies over the next five-to-ten years as “budgetary challenges, such as sequestration, have forced customers to be more creative and to look for the savings technology can deliver.”

“I think that government is really starting to understand that through the right investments in technology, they can actually achieve the savings that have been touted for so many years but never delivered.” Antle formed Salient after a close-to-ten-year stint with SI International, which he joined in 1999 and led as president from 2001 and CEO from 2005 to 2008. Serco Inc. acquired the company on the last day of 2008.

Antle helped lead SI’s 2002 IPO after rising to the president role in 2001 and helped lead and integrate two secondary offerings and eight acquisitions over his time with the firm.

“Although I was early to the management team and was president long before the 2002 IPO, I was not there at the start,” Antle said about his motivation to found Salient.

“I definitely wanted to start my own company and firmly believed there was room for a rapidly adaptive company in the middle market.”

Prior to joining SI, Antle was named the first Director of Washington Technical Operations for Lockheed Martin and within 3 years grew the organization to more than 1,700 engineers supporting 70 programs at 21 sites.

He entered the private sector in 1985 with General Electric where he formed GE’s Quality Engineering department, where 150 workers supported more than $400 million in development contracts.

Antle served eight years in the U.S. Navy, including as a Deputy Department Head for Systems Engineering at a software development facility for tactical embedded systems.

Following his release from active military service, he served in the Naval Reserve from which he retired with the rank of Captain. Antle holds graduates degrees in engineering and business from Penn State University and the National University, respectively, and earned his undergraduate business degree from the University of Maryland.

He is the immediate past chair of the Northern Virginia Technology Council and serves on the board of the National Defense Industrial Association and the boys and Girls Club of Greater Washington. He also serves as director of the TechAmerica Public Services board and director of the Veterans Services Foundation.