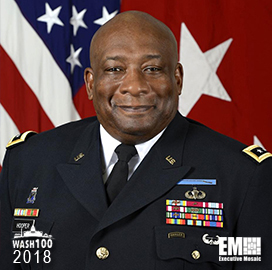 Executive Mosaic is honored to introduce Lt. Gen. Charles Hooper, director of the Defense Security Cooperation Agency, as an inductee into the 2017 edition of the Wash100 — Executive Mosaic’s annual selection of influential leaders in the government contracting arena — for demonstrating excellence in foreign military sales through his encouragement of cooperation between those in the intelligence community working on technology and security.

Hooper was appointed as DSCA director and promoted to the rank of three-star lieutenant general in August.

He joined the U.S. Army in 1979 as an infantryman and later served in various in command and staff assignments, including chief of the military cooperation office at the U.S. embassy in Cairo.

Hooper said the figure reflects DSCA’s push to implement a “total package approach” that includes the delivery of maintenance, training and sustainment support to partner nations.

The DSCA chief stated at a September conference involving U.S. military officials and partner nations that DSCA aims to speed up the foreign military sales process and help countries better identify defense systems that will meet their needs.

Hooper told lawmakers during a Senate hearing in September that DSCA has launched various initiatives to optimize the FMS system, including collaboration with military departments to streamline the development of FMS cases.

He testified that DSCA also works with the technology security community to study new approaches to safeguard U.S. defense technology, as well as with interagency stakeholders to flag potential concerns in FMS requests, including regional stability and human rights issues.

Executive Mosaic congratulates Lt. Gen. Hooper and the DSCA team for their selection to receive this award.