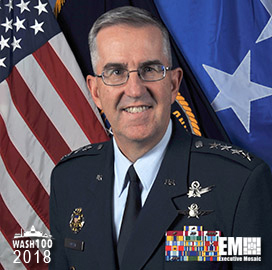 Executive Mosaic is honored to introduce Gen. John Hyten, commander of the U.S. Strategic Command, as an inductee into the 2017 edition of the Wash100 — Executive Mosaic’s annual selection of influential leaders in the government contracting arena — for his initiatives in addressing national security in acquisition and command capacities.

He held various roles related to space acquisition and operations at the U.S. Air Force, including commander of the Air Force Space Command.

Hyten said at the Hudson Institute in September that STRATCOM is focused on strategic nuclear deterrence and on the execution of a response in case deterrence fails.

He told reporters in April that the U.S. government should increase funding for efforts to modernize the country’s nuclear arsenal from 3.5 percent to six percent of the defense budget to meet modernization needs.

In July, Hyten announced the establishment of Joint Force Component Commands responsible for space, air, sea and missile defense activities as part of a push to reorganize the command.

The STRATCOM chief has repeatedly highlighted the need to accelerate the U.S. military’s technology development to address national security threats and outpace adversaries.

Hyten told Strategic Studies Quarterly in a July interview that he wants to overhaul the Defense Department‘s buying process by obtaining authorities needed to execute a program, reestablishing program accountability and addressing bureaucracy.

Executive Mosaic congratulates General Hyten and the STRATCOM team for their selection to receive this award.