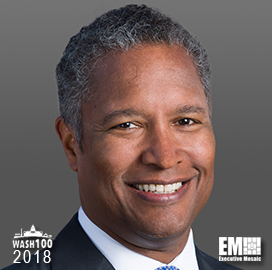 Executive Mosaic is honored to introduce John Harris, vice president of business development at Raytheon and CEO of the company’s international business, as an inductee into the 2018 edition of Wash100 — Executive Mosaic’s annual selection of influential leaders in the government contracting arena — for his exceptional ability to form working relationships with global industry partners around the integration of aerospace and defense capabilities. This is his first time receiving the award.

Harris oversees the defense contractor’s global sales and marketing, international business, government relations and operations, as well as the execution of the firm’s business strategy. He told CNBC in an interview at the Dubai Airshow in November 2017 that Raytheon has been seeing growth in missile defense systems market in the Middle East and Europe due to increasing “threat dynamics.”

“There’s been [increased] demand because of the threat dynamic in our core competencies which are: integrated air missile defense, precision-guided munitions, cyber, mission support, all areas that give our allied nations the ability to protect their sovereignty.”

Last July, Harris said he believes the Gulf Cooperation Council’s (GCC) increasing awareness about cyber threats offers an opportunity for the company to expand in the region.

“Cyber attacks occur somewhere in the world every day, and so companies and institutions are engaging Raytheon to help them understand how and where they are vulnerable, and to find solutions that make their network and products more secure,” he said.

In December 2017, Harris mentioned the company’s plan to expand its partnership with the UAE. He noted that the role of defense programs in advancing partnerships with companies in the GCC, particularly in the United Arab Emirates, is paramount to success.

“Partnership is a key component of global business, and the GCC has been very forward-thinking in working with us in the sphere of integrated aero-defense systems and precision munitions,” he added. “We are actually having meaningful discussions with the Emirates government to further our partnership and grow it,” Harris said. “Our intention is to create capacity that not only can support a program but can also be part of the global supply chain.”

Harris’ 35-year career at Raytheon includes time as general manager of the firm’s intelligence, information and services business and VP of contracts and supply chain. Harris chairs the board of directors for Raytheon Canada Limited and serves on the board of directors for Raytheon Australia, Raytheon Emirates, Raytheon Saudi Arabia and Raytheon United Kingdom. He also serves on the RTCA NextGen Advisory Committee, the Board of the USO of Metropolitan Washington, D.C., the National Advisory Council on Minority Business Enterprise with the U.S. Department of Commerce, and the Council of Trustees for the Association of the United States Army.

Executive Mosaic congratulates John Harris and the Raytheon team for their selection to receive this award.