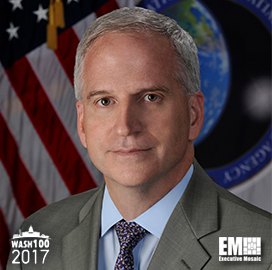 Executive Mosaic is pleased to introduce Robert Cardillo, director of the National Geospatial-Intelligence Agency, as the newest inductee into the Wash100 — Executive Mosaic’s annual selection of influential leaders in the government contracting arena.

Prior to his role as NGA director, Cardillo served as the deputy director for intelligence integration at the Office of the Director of National Intelligence and he also took helm as a senior manager at the Defense Department.

In October 2016, NGA awarded a $20 million introductory contract to Planet for the delivery of small satellite imagery of Earth’s landmass and noted that the company will look to meet the mission requirements of various commercial space partners.

NGA said at the time the global coverage and temporal frequency of the company’s imagery collection can support disaster response, GEOINT, humanitarian assistance and intelligence missions.

The agency worked with the General Services Administration to create a program known as the Commercial Initative to Buy Operationally Responsive GEOINT program that will facilitate the adoption and acquisition of commercial data and analysis services.

The program will utilize GSA schedules and other government-wide contract vehicles to support the procurement of commercial imagery and analytical services.

Cardillo also led an NGA-launched hackathon series designed to foster relationships with software developers and industry partners as well as create tools and techniques for the visualization and dissemination of big data.

NGA also introduced a $200,000 competition on the Challenge.gov website for programs that will look to mitigate disparate data challenges as well as offer unified access to data with various formats, interfaces, locations and schemas to support business metrics and information analytics applications.

He holds a bachelor’s degree in political science and government from Cornell University and a master’s degree in national security studies from Georgetown University.