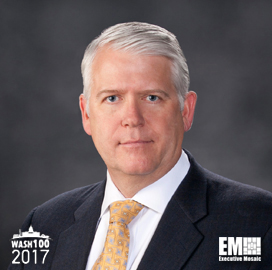 Executive Mosaic is pleased to introduce Rick Ambrose, executive vice president of Lockheed Martin’s space systems segment, as an inductee into the 2017 edition of the Wash100 — Executive Mosaic’s annual selection of influential leaders in the government contracting arena.

Lockheed partnered with geospatial imagery company DigitalGlobe in November to launch the WorldView-4 satellite for collections of commercial images at 30-centimeter resolutions and continue technological progress in the remote sensing field.

Ambrose noted then that Lockheed will leverage its skills in radiofrequency and optical technologies in combination with Collinear’s networking technology experience to develop the hybrid communications platform.

In an April 2016 interview with Space News, he said the company considers the convergence of commercial and defense systems in an effort to meet the government’s future needs for space systems.

For a LinkedIn article published in March 2016, Ambrose acknowledged the growth in investments across the space industry and discussed Lockheed’s work on the Exploration Mission-1 crew module at NASA’s Kennedy Space Center.

Calendar year 2016 also saw the development of a Lockheed-made online portal, HelpNowMap.com, that works to provide post-disaster data from the ground with the use of DigitalGlobe’s satellite imagery.

Ambrose is a 35-year aerospace and defense industry veteran who joined Lockheed in 2000 and has since held senior leadership positions within the space systems segment and the former information systems and global solutions business.

Prior to Lockheed, Ambrose served as VP of space systems for a business segment at Raytheon and has also held the role of president and general manager of space systems at Hughes Network Systems’ information technology systems business.

He is also chairman of the board of directors of United Launch Alliance and a board member of the Space Foundation.

Executive Mosaic congratulates Rick Ambrose and the Lockheed team for their selection to receive the award.