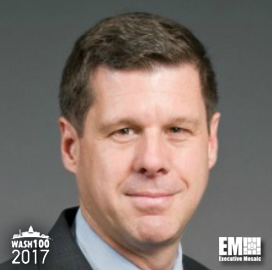 Executive Mosaic is honored to introduce Sam Gordy, general manager of IBM‘s (NYSE: IBM) U.S. federal and government industries, as an inductee into the 2017 edition of the Wash100 — Executive Mosaic’s annual selection of influential leaders in the government contracting arena.

In February 2016, IBM obtained an authorization from the Defense Information Systems Agency to deliver IBM Cloud services at the highest security levels for the Defense Department‘s controlled and unclassified information.

Gordy said at the time IBM Cloud will give DoD agencies “an ideal option to launch workloads in a hybrid cloud that can be easily integrated with their on premise systems.”

Also in 2016, IBM received a potential five-year, $62 million contract from the U.S. Army to develop, manage and operate a cloud platform as part of the Army Private Cloud Enterprise program.

“This IBM Cloud solution will provide the Army with greater flexibility and will go a long way toward mitigating, and, in some cases eliminating, the security challenges inherent with multiple ingress and egress points,” Gordy said.

Executive Mosaic congratulates Sam Gordy and the IBM team for their selection to receive this award.