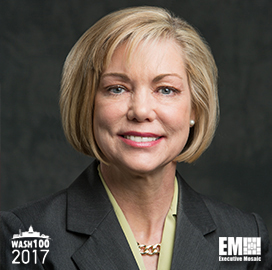 Dugle became chief executive of the Chantilly, Va.-based government services contractor in March almost one year after she retired from a 12-year career at Raytheon (NYSE: RTN), where her most recent role was president of the defense company’s intelligence services business.

She has since prioritized efforts to reposition Engility for a full return to organic growth this year, a shift toward “best-value” contracts versus the company’s original low-cost approach and repayments on debt incurred from the February 2015 acquisition of TASC and January 2014 purchase of Dynamics Research Corp.

Two major contract wins for Engility in 2016 serve as examples of its pivot away from the “lowest-priced, technically acceptable” strategy it was founded upon in the July 2012 launch toward best-value projects that involve highly-technical, complex work.

One potential five-year, $369 million contract announced in October covers engineering services to support the Federal Aviation Administration‘s NextGen air traffic modernization program, while a second program worth up to $112 million over five years is for computational science services to the Food and Drug Administration.

Engility made a series of internal investments focused on return to organic revenue expansion that led to those awards and indicated the company is “approaching the inflection point from negative to positive organic revenue growth,” Dugle told investors in November.

Those two contracts also demonstrate how many agencies have shifted away from LPTA for many contracts, Dugle said.

“When we look out across at our waterfront and consider what we will pursue, I believe that there is plenty of best value contracting where we have some very visible difference either through past performance or some kind of technical tool ladder,” she added.