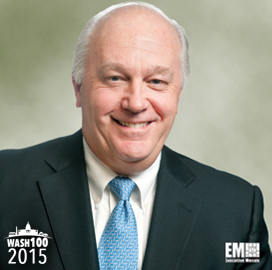 Executive Mosaic is glad to announce Richard Montoni, president and CEO of Maximus, as the newest inductee into the Wash100 — a group of influential leaders in the government contracting industry.

Montoni was appointed chief executive in 2006 and oversees the company’s strategy to grow its footprint as a pure-play provider of health and human services to government customers worldwide.

Maximus released its fiscal year 2014 financial report in November 2014 and said it recorded a 24-percent year-over-year increase in revenue with a 28-percent bump in profit from fiscal 2013.

“Year-to-date signed awards reached a record $2.0 billion and contributed to a healthy backlog of $3.8 billion,” Montoni said at the time.

In a PwC survey of business leaders released in January, Montoni said Maximus is working to build a diversified, “local” workforce as the company pushes to expand in additional geographic markets and also focus on its current services portfolio.

“We believe that focus allows you to differentiate yourself in the marketplace and to achieve things that other folks who are very diversified can’t,” Montoni said.

Montoni previously served as chief financial officer and treasurer of Maximus, CFO and executive vice president at Ciber and an audit partner at KPMG.

Executive Mosaic offers its congratulations to Richard Montoni and the Maximus team for their selection to receive this award.