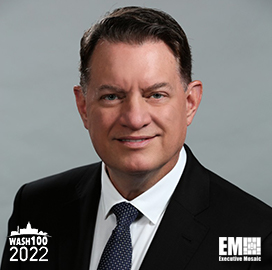 Executive Mosaic is honored to announce Rick Wagner, president of Microsoft’s U.S. federal subsidiary, as a recipient of the 2022 Wash100 Award. He has been chosen five consecutive times to Executive Mosaic’s annual list of executives who continually drive growth and innovation in the government contracting sector.

Cast a vote for him as one of your favorite leaders on Wash100.com.

The Microsoft Federal group, which Wagner has led since July 2020, integrated into the Azure engineering organization in October 2021 as part of a reorganization move aimed to increase team collaboration and accelerate the integration of cloud platforms built for sector clients.

“This new organizational structure will allow us to deliver the latest technology innovations tailored to customers’ specific needs. Our goal is to create space for modern mission breakthroughs – delivering outcomes that make a difference, across all our products and for all our customers,” Wagner wrote in an Oct. 13 blog post.

Prior to the realignment, Microsoft secured accreditation for the Azure Government Top Secret platform to support national security agency workloads at the highest level of data classification.

In a November interview with ExecutiveBiz, Wagner said his group will continue its efforts to bring cloud capabilities both at the enterprise level and at the edge.

“This is all part of efforts that we’re taking to help the government operate at the edge in austere environments and be able to bring artificial intelligence and machine learning capabilities to that edge as well,” said the five-time Wash100 awardee.

“Through the ecosystem of all satellite providers, we’ve got a growing network that we can now extend our cloud across to allow people to access the cloud from anywhere. We’re partnering with all the leaders in the space community, and being able to unblock supercomputing into more and more scenarios and places where they would not have necessarily had the reach in the past,” he added.

Microsoft is among the four technology providers selected in November to bid for the Joint Warfighting Cloud Capability contract, the Department of Defense’s replacement for the Joint Enterprise Defense Infrastructure program also known as JEDI.

Also in 2021, the U.S. Army chose Microsoft to supply more than 120,000 units of the Integrated Visual Augmentation System to the branch’s close combat force under a potential 10-year, $21.88 billion contract.

Executive Mosaic congratulates Rick Wagner and the Microsoft organization for their inclusion in the 2022 edition of the Wash100.