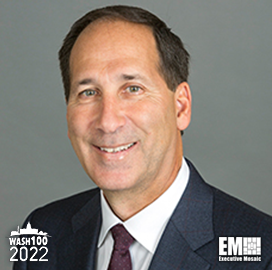 Al Whitmore, president of the intelligence and security sector for BAE Systems’ U.S. subsidiary, has been selected to the 2022 Wash100 list that recognizes the most significant contributors in the government contracting arena and marks his fifth consecutive induction.

Executive Mosaic CEO Jim Garrettson noted Whitmore’s selection to the Wash100 last year as a recognition of his personal commitment and involvement in growth efforts at BAE Systems Inc. Cast a vote for Whitmore as one of your favorite GovCon leaders on the Wash100 site.

Whitmore joined the British defense contractor’s U.S. executive team in October 2017 to oversee the unit formerly led by DeEtte Gray, a 2022 Wash100 awardee herself who is now president of business and information technology solutions at CACI International.

He previously oversaw the global solutions division at General Dynamics Information Technology as senior vice president and spent nearly 15 years at GTE Government Systems before its 1999 sale to General Dynamics. His contributions to the field of cybersecurity were recognized by The Consulting Report.

The following month, the Falls Church, Virginia-based contractor named Kelly Ayotte, a former senator from New Hampshire, as chair of the board of directors to replace Michael Chertoff, who has held the position since April 2012.

BAE’s notable bookings of 2021 came from the U.S. Army in July when the branch awarded the company’s land and armaments business a $600.2 million contract to maintain Armored Multi-Purpose Vehicles and selected its technology and services unit to compete for National Cyber Range Complex support orders under a $2.41 billion contract.

In that same month, BAE introduced its virtual system of systems testbed with the intent to help defense clients experiment with systems and data management processes before implementing these in operations.

Whitmore said at the time his intelligence and security business group aims to deliver the open architecture testing platform to customers with multidomain operational requirements.

“Our systems engineering and modernization capabilities will accelerate the delivery of information and support national security missions,” the more than three-decade industry veteran added.

The company will also perform C4I systems engineering work for the U.S. Navy under a potential $140.4 million indefinite-delivery/indefinite-quantity contract announced in March and will continue to support the Navy Strategic Systems Programs office through a separate $478 million contract awarded in September.

Also in 2021, BAE teamed up with Science Applications International Corp. and By Light Professional IT Services to pursue the U.S. Air Force’s Mission Partner Environment modernization program. Under an exclusive arrangement, all three companies will focus on applying complementary offerings in a bid to address MPE architecture, engineering and integration requirements.

Executive Mosaic extends its congratulations to Al Whitmore and the rest of the BAE Systems organization for their Wash100 Award.