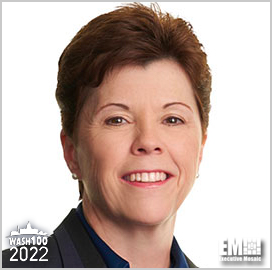 Executive Mosaic is honored to present Mary Petryszyn, corporate vice president and president of defense systems business at Northrop Grumman, as a 2022 Wash100 Award recipient for her efforts to help enable military and allied forces to interoperate and network across all domains as well as to continue advancing defense capabilities and services.

This marks Petryszyn’s second consecutive Wash100 Award. Her first entry into Executive Mosaic’s annual list of the most notable executives and officials in the government contracting arena was in recognition of her leadership in driving modernization and supporting new technology offerings for the defense, security and military sectors.

Cast your votes for Petryszyn and your other favorite GovCon leaders on Wash100.com, where you can also read about the nine-year history of the award and its current and previous recipients.

As CVP and defense systems president at Northrop, Petryszyn is responsible for overseeing company efforts to provide national security, military and civil customers with a range of missiles and tactical weapons, all-domain command and control architectures, integrated battle command systems as well as sustainment and modernization capabilities.

One of the most significant contract awards to Northrop in the previous year is the potential $1.38 billion deal with the U.S. Army for the production and deployment of a system for detecting, tracking and countering enemy missiles and other aerial threats. The company will develop the Integrated Battle Command System and provide logistics and product engineering support during a period of up to five years.

“IBCS is a centerpiece of the U.S. Army’s modernization strategy for air and missile defense to address the changing battlefield,” said Petryszyn. She added that Northrop and the service branch will collaborate to enable all-domain command and control capability using the open and modular architecture.

During an Executive Spotlight interview with ExecutiveBiz, Petryszyn spoke more about C2 technologies.

“One of the things that’s very important in connecting information together for decision making, looking at today’s environments, is the ability for our allied forces to interoperate together and network across all domains. It’s a critical aspect for meeting the challenges of modern threats from land, air, sea or even space,” emphasized Petryszyn.

The Q and A also tackled the Department of Defense’s need for assistance in deploying hypersonic capabilities and how Northrop is working to meet that requirement while offering other defense capabilities and services.

In the previous year, the company secured several defense contracts including the $959.1 million Army award for the production of aircraft common infrared countermeasure systems and the $3.86 billion deal with the Air Force for sustainment services in support of the ground subsystems of the Minuteman III Intercontinental Ballistic Missile system.

The Navy also made a January 2021 announcement that France will buy an updated variant of Northrop’s E-2D Advanced Hawkeye airborne C2 aircraft platform from the service branch for approximately $2 billion, which will also provide for spares and support equipment as well as engineering, training and follow-on support services.

In addition, MDA awarded $1.6 billion in contracts to Northrop and another defense company for technology development and risk reduction work under the Next Generation Interceptor program. If all options are exercised, Northrop’s contract could reach a total value of $3.93 billion.

To further support its work with the DOD, Northrop has opened new facilities in several U.S. locations. In August, the company established the Missile Defense Futures Lab in Huntsville, Alabama, and a Colorado Springs, Colorado-based facility for accomodating delivery of missile defense capabilities and strategic deterrent systems to government and military customers. Another a Cummings Research Park-located office dedicated to supporting the Air Force ICBM program.

Commenting on Northrop’s work, Petryszyn said, “We’re able to support customers in keeping their existing capabilities pacing those threats and staying relevant through persistent modernization. Additionally, we are delivering advanced weapons and munitions technologies that add precision effects to artillery and gun systems that can increase their effectiveness without needing to develop and field new platforms.”

Executive Mosaic congratulates Mary Petryszyn and the Northrop team for their 2022 Wash100 selection.