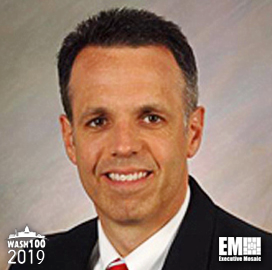 Executive Mosaic is honored to introduce Michael Maiorana, Verizon Public Sector senior vice president, as an inductee into the 2019 Wash100 “” Executive Mosaic's annual selection of the most influential voices in the government contracting arena “” for his leadership and sales expertise that led to several big moves and contracts for the company. This marks the first Wash100 award for Maiorana.

In August, Verizon received a $297.3M contract modification from the Virginia Information Technologies Agency for voice and data network services in support of the state's units. Under the renewed contract, work will continue over a five-and-a-half-year period to modernize services for VITA.

Verizon led the effort to help the Department of Defense migrate to a unified communications system in June. The system will give users a single platform to integrate voice, use conferencing, instant messaging and video communications.

Under Maiorana's leadership, the company partnered with other companies and utilized a Joint Interoperability Test Command-certified application server from Ribbon Communications to deploy the UC platform to replace DoD's core communications system and facilitate the use of at least 60,000 endpoints.

In July, Equinix's government solutions arm completed its integration of Verizon's former business unit Terremark Federal Group in June. The end of the integration marked the closure of Equinix's $3.6B acquisition of 29 data centers from Verizon.

Maiorana manages Verizon's sales team, engineering and sales support personnel and is responsible for sales and customer satisfaction. Before his current role, Maiorana was president of the Washington-Baltimore-Virginia region for Verizon and was responsible for sales, customer service, marketing and the expansion of the company's wireless network.

Maiorana was also the vice president of Verizon's national government sales and operations. He was responsible for sales and customer service for federal, state and local government customers, including law enforcement, public safety and municipalities.

In 1990, Maiorana began his career as a sales representative and climbed the ladder through a number of positions, including regional director of corporate and government accounts, director of retail sales and director of sales operations and training.

Currently, he's also serving his second term as a member of the board of directions for the Northern Virginia Technology Council and is a five-time winner of the Verizon Wireless President's Cabinet award for sales achievement.

Visit the Wash100 website to learn more about the winners of the 2019 Wash100 Award. You can submit your 10 votes for the GovCon executives of consequence that you believe will have the most significant impact in 2019.