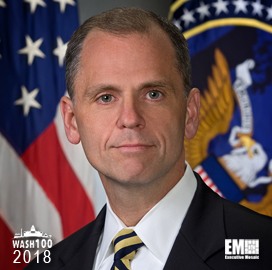 Roger Mason, Peraton President of Space, Intelligence & Cyber, Inducted Into 2018 Wash100 for his Leadership in the Intelligence and Cyber Marketplace Executive Mosaic is honored to introduce Roger Mason, president of space, intelligence and cyber at Peraton, as an inductee into the 2018 edition of the Wash100 — Executive Mosaic’s annual selection of influential leaders in the government contracting arena–for demonstrating effective leadership in the intelligence technology sector.

Peraton CEO Stu Shea said the company expects the new sector to generate approximately $475 million in annual revenue from space, intelligence and cyber work with government customers such as NASA, the National Reconnaissance Office and the U.S. Air Force.

Mason was recognized in the 2017 Wash100 list for his leadership efforts in cyber workforce development.

Mason rejoined the nonprofit science and technology organization after serving as assistant director of national intelligence at the Office of the Director of National Intelligence.

Prior to ODNI, Mason was vice president of national security and intelligence at Noblis.

Executive Mosaic congratulates Roger Mason and the Peraton team for their selection to receive this award.