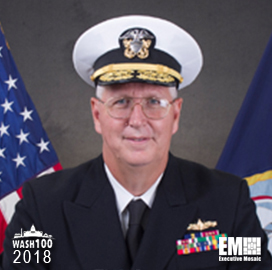 Vice Adm. David Lewis Inducted Into 2018 Wash100 for his Leadership in Advancing the Oversight Mission of the DCMA Executive Mosaic is honored to introduce David Lewis, director of the Defense Contract Management Agency, as an inductee into the 2018 edition of the Wash100 — Executive Mosaic’s annual selection of influential leaders in the government contracting arena–for demonstrating success in spearheading the deliverance of information warfare solutions for application in the cyber domain.

Vice Adm. David Lewis was nominated to lead DCMA in March 2017 and assumed the position in May 2017 during a change of command ceremony.

Lewis said at the ceremony that he seeks to continue DCMA’s efforts to deliver military equipment and systems; to provide the “best value” to the country; and to train employees to “work smarter.”

“I see DCMA as poised to move up to the next level across all of our competencies, and I very much look forward to participating in that necessary organizational growth process,” the director stated.

He added that DCMA can achieve performance growth by modernizing its information technology, knowledge management and personnel systems.

Lewis served in various at-sea and ashore assignments within the U.S. Navy, including a stint as commander of the Space and Naval Warfare Systems Command.

As SPAWAR chief, Lewis led the command’s migration from Blackberry mobile devices to iPhone or Android platforms, both at sea and onshore.

He said at the WEST 2017 conference in February 2017 that the mobile device transition is one of several SPAWAR priorities and is part of a strategic plan, which also includes the consolidation of Navy websites into a single portal as well as the use of additional commercial cloud platforms.

Executive Mosaic congratulates Vice Adm. Lewis and the DCMA team for their selection to receive this award.