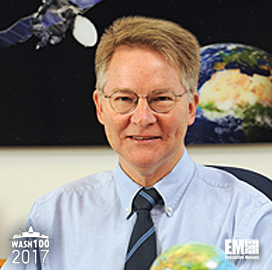 Executive Mosaic is honored to introduce David Thompson, president and CEO of Orbital ATK, as an inductee into the 2017 edition of the Wash100 — Executive Mosaic’s annual selection of influential leaders in the government contracting arena.

Thompson co-founded the company’s predecessor Orbital Sciences in 1982 and led the company’s merger with the former aerospace and defense groups of ATK in February 2015 to form the Dulles, Va.-based contractor now known as Orbital ATK.

In February of this year, Orbital ATK secured a potential $119 million contract to help the U.S. Army develop and produce a 120-millimeter ammunition for the Abrams Main Battle Tank.

Also that month, NASA unveiled plans to launch an Orbital ATK-built Cygnus spacecraft on March 19 to carry out the seventh cargo delivery mission to the International Space Station.

The company also announced plans to co-locate its Abu Dhabi-based joint venture — Orbital ATK Middle East — with Al Tuff International at the Addax Commercial Tower in United Arab Emirates in an effort to provide defense platforms and services to clients across UAE as part of a regional defense market strategy.

He said Orbital ATK projects orders from defense, NASA and other science-based agencies to account for 75-85 percent of total satellite revenue compared with the range of 55-60 percent in the last three years.

“We expect the order slump to continue for some time as major operators rethink their fleet plans and react to downward pressure on transponder prices as major additions to their capacity in the production pipeline now come online,” Thompson added.

In April 2016, Orbital ATK received a contract to develop, test and launch a commercial in-space servicing vehicle – Mission Extension Vehicle-1 – for Intelsat as part of efforts to extend the life of in-orbit satellites.

“There is a vital need to service fully functional but aging satellites in both commercial and government markets,” Thompson said at the time.

Thompson’s career prior to Orbital includes time at the former Hughes Aircraft, where he served as special assistant to the president of the firm’s missile systems group, and experience at NASA as an engineer and project manager on rocket engines at Marshall Space Flight Center.

Executive Mosaic congratulates David Thompson and Orbital ATK team for their selection to receive this award.