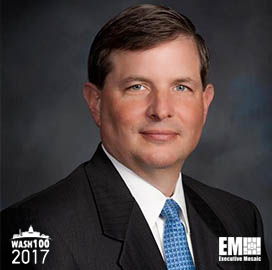 Executive Mosaic is honored to announce Chris Kubasik, president and chief operating officer of L3 Technologies, as an inductee into the 2017 edition of the Wash100 — Executive Mosaic’s annual selection of influential leaders in the government contracting industry.

Kubasik joined the New York-based communications and electronics technology maker in October 2015 and the company once known as L-3 Communications sold its government services business to CACI international for $550 million three months later.

Since that divestiture, L3 has made a series of acquisitions in an effort to expand its footprint in national defense and aviation security markets.

L3 wrapped up its $117.5 million purchase of Implant Sciences’ explosive trace detection business in January of this year nearly two months after the acquisition of U.K.-based aviation security technology manufacturer MacDonald Humfrey Automation in a deal worth up to $315.5 million.

“The acquisitions are all very different, fit our criteria of expanding market share and increasing our customer base,” Kubasik told investors in October 2016.

Prior to L3, Kubasik previously served as president and CEO of the advisory group at professional services firm Seabury for two years.

Kubasik, who was elected to the board of governors of The Wings Club Foundation in April 2016, spent two years at Lockheed Martin as president and COO.

Executive Mosaic congratulates Christopher Kubasik and the L3 Technologies team for their selection to receive this award.