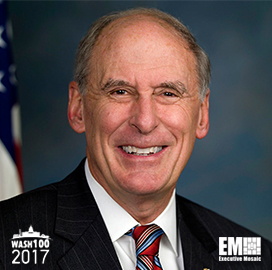 Executive Mosaic is honored to announce Dan Coats, nominee for the director of national intelligence role, as an inductee into the 2017 edition of the Wash100 — Executive Mosaic’s annual selection of the most influential voices in the government contracting arena.

Coats noted that cyber attacks such as email hacking and various attacks on the nation’s political infrastructure will be among his top priorities once he gets confirmation from the Senate for the DNI role.

“Today these threats come through the push of a button on a computer, a cyber-threat, interfering with political infrastructure, hacking people’s emails,” said Coats.

The director of national intelligence is responsible for coordinating intelligence collection and analysis of the country’s 16 civilian and military spy agencies to help prevent terrorist attacks and act as a liaison to presidents and the White House staff.

He also sponsored an amendment that would boost the role of the government’s counterintelligence office that tracks foreign spies who operate in the U.S., as well as insider threats such as Edward Snowden’s leaks of National Security Agency information.

“In the wake of the Snowden leaks, it is more important than ever for the White House, the director of national intelligence and the Senate Intelligence Committee to work together to strengthen our counterintelligence practices,” said Coats.

Coats is a former member of the House from Indiana’s 4th district, Senate Armed Services and Intelligence committees as well as held the role of U.S. ambassador to Germany.

He holds a bachelor’s degree in political science from Wheaton College and a juris doctorate from the Indiana University Robert H. McKinney School of Law.

Executive Mosaic congratulates Dan Coats for his selection to receive this award.