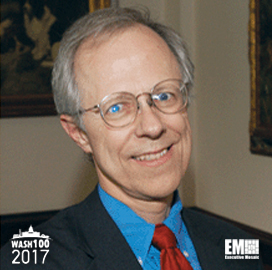 Executive Mosaic is glad to unveil David Berteau, president and CEO of the Professional Services Council, as the newest inductee into the Wash100 — Executive Mosaic’s annual selection of influential leaders in the government contracting arena.

Berteau, a 14-year Defense Department veteran, has led the trade association that represents nearly 400 government technology and professional services contractors since his appointment to the role in March 2016.

In November, he urged Congress to pass a full-year appropriations package and other key bills to ensure continuity of federal missions and accompanying contractor support services for the rest of the government’s 2017 fiscal year.

He also offered suggestions to the incoming administration about how it should work to facilitate a smooth transition in an opinion piece for Washington Technology.

“The best way to restore and rebuild trust in government is to perform better, deliver results, and reduce costs,” Berteau wrote.

“The new team needs to preserve continuity in successful programs across all federal agencies.”

Before he joined PSC, Berteau managed DoD’s logistics policy and processes as the assistant defense secretary for logistics and materiel readiness.

He previously spent eight years at Science Applications International Corp., where his career includes time as a senior vice president.