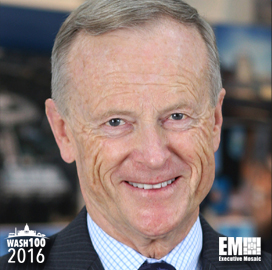 Executive Mosaic is pleased to introduce Neal Blue, chairman of General Atomics, as an inductee into the 2016 edition of the Wash100 — Executive Mosaic’s annual selection of influential leaders in the government contracting arena.

Neal Blue and his brother Linden acquired General Atomics from then-owner Chevron in 1986 and GA originally focused on projects and technologies related to nuclear physics.

After they purchased GA, Neal established an “advanced technology projects” division in an effort to discover and develop military platforms.

Blue is also founder and CEO of GA Aeronautical Systems, the GA affiliate that produces Predator UAVs and variants such as the Reaper.

Blue also serves as chairman and co-founder of Cordillera Corp. – a family-owned firm with investments in oil and gas, agriculture and real estate, among others.

The former U.S. Air Force pilot served as a trustee of the University of California San Diego Foundation and the Salk Institute.

Executive Mosaic extends its congratulations to Neal Blue and the General Atomics team for their selection to receive this award.