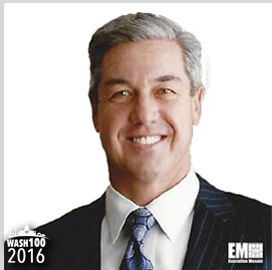 Executive Mosaic is honored to introduce Jerry DeMuro, president and CEO of BAE Systems PLC‘s U.S. subsidiary, as an inductee into the 2016 edition of the Wash100 — Executive Mosaic’s annual selection of influential leaders in the government contracting arena. This is DeMuro’s second time to be selected.

DeMuro succeeded Linda Hudson as chief executive of BAE Systems Inc. in February 2014 and is also an executive director on the boards of both the subsidiary and the parent company.

BAE Systems Inc.’s revenue for 2015 increased approximately 1.3 percent from the prior year period to $9.84 billion with sales figures based the average exchange rate of the British pound to the U.S. dollar in both 2014 and 2015.

Sales generated by BAE Systems Inc. represented nearly 36 percent of the group’s overall sales in 2014 and 2015.

Prior to BAE, he worked at General Dynamics as executive vice president of the company’s information systems and technology segment for 10 years until his early 2013 retirement from the Falls Church, Virginia-based defense contractor.

He was a vice president and general manager at GTE‘s government systems segment in 1999, when it was acquired by General Dynamics.

DeMuro is also a former EVP at Anteon International and an acquisition official at the Defense Department.

DeMuro is a member of the MILCOM Conference Board, AFCEA International and the Association of the United States Army.

Executive Mosaic congratulates Jerry DeMuro and the BAE Systems team for their selection to receive this award.