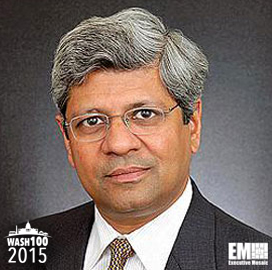 Executive Mosaic is honored to introduce Sudhakar Kesavan, chairman and CEO of ICF International, as the newest inductee into the Wash 100 — a group of influential leaders in the government contracting industry.

He was president of ICF Kaiser‘s consulting subsidiary until a buyout of the consulting group was completed in 1999, followed by the group’s separation from Kaiser’s engineering business to form the company now known as ICF.

Kesavan led ICF through that transition and its initial public offering in 2006.

In 2014, the Fairfax, Va.-based company moved to expand its presence in the digital services space with its $295 million cash acquisition of Olson, a move ICF made to support both its government and commercial business segments.

“Our clients are increasingly using mobile platforms, social media and the web for interacting with their customers and stakeholders,” Kesavan said.

“A deep and sophisticated understanding of consumer behavior combined with the use of digital technologies will be increasingly key to helping ICF’s clients implement solutions in the future.”

He serves as chairman of the Northern Virginia Technology Council and a member of the ABM Industries board of directors and Inova Health System‘s board of trustees.

Executive Mosaic congratulates Sudhakar Kesavan and the ICF International team for their selection to receive this award.