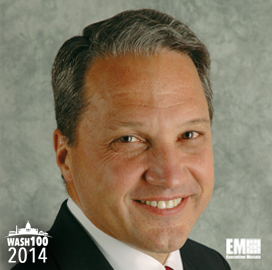 Executive Mosaic is honored to announce Bill Hoover, president and CEO of AMERICAN SYSTEMS, as the newest inductee into the Washington 100, the premier group of leaders who drive innovation and growth at the intersection of the public and private sectors.

When Hoover joined the employee-owned contractor eight years ago, he said he had an opportunity to lead a “mature company that was poised to take the next step of its evolution.”

The U.S. Navy veteran and Naval Academy graduate brought experience founding  several consulting firms that served mid-tier companies in transition, and joined AMERICAN SYSTEMS from his previous role as president and chief operating officer at Dynamic Research Corporation, where he lead the development of the firm’s growth strategy.

The company said Hoover brought a focus on documented and repeatable business processes to his chief executive role and Hoover said a priority of his was to work with the management team to enhance the corporate infrastructure to enable the Chantilly, Va.-based firm to compete for larger prime contracts.

“We built a solid business development team and strategy and invested in the tools and processes that would enable that team to succeed,” Hoover told GovCon Exec. “We then integrated that team within our operations group for better synergy, collaboration, and cost-efficiencies.” “This all occurred during one of the most challenging and competitive periods in this century.”

With the appointment of Chief Operating Officer Peter Smith at the start of 2010, Hoover has since shifted more of his focus and time to strategic efforts and the company continues to build up resources.

In late 2012, AMERICAN SYSTEMS signed a deal to pick up SAIC’s test and evaluation business, which Hoover said was “unequivocally… the smoothest one” out of the numerous M&A deals he has been part of in the industry.

“What excites me most is that we have segued from being a sub-contractor of choice to being a contractor of choice, with the scalable infrastructure and solid leadership team in place to continue our growth for years to come,” Hoover said.

Outside of the office, Hoover plays an active role in his industry and community and serves on the boards of several not-for-profit and professional and industry-related organizations.